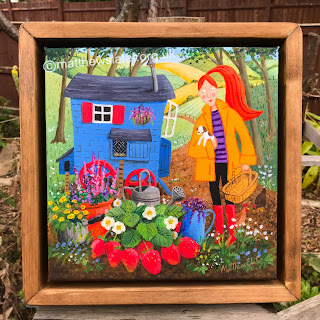 This 30x30cms acrylic on canvas painting will be going into an exhibition at the Art Nest gallery in Hitchin, 12 October to 2 November. Earlier in the year I painted a picture similar to this as an experiment. It has now been improved, repainted and mounted in a handmade wooden frame. This is a one off and I have no plans to do any more, though I must admit I think this worked quite well.... so you never know...

#matthewslaterart
Posted by Matthew Slater at Sunday, September 29, 2019 No comments: 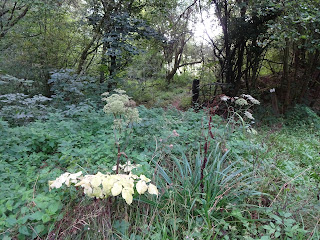 I have watched a late summer dawn break over the still, mirrored surface of a lake and now make my way back to my campsite over dew laden corn stubble and through the cider apple trees.
On the edge of a small wooded track, passing down from the cherry orchards to the damp, shady alder filled woodland, lies a tree trunk. It is an ideal place upon which to sit and absorb my surroundings. Many years ago it had fallen across the gentle bank beside the bridleway and now its decaying form is covered in soft green moss. A slate-grey leafy lichen is growing along the side facing out away from bank. This forms flat, paper-like structures with creamy upturned edges. For various reasons I initially thought it was a fungus and, when I couldn’t locate it in any identification guide, I realised it was dog lichen (Peltigera Canina).
There is a deep “croak, croak, croak” in a tree high above me. I assume it is a carrion crow. However, once home I listen to various crow calls on the internet and realise it was likely to be a raven. I hadn’t even given this possibility a thought and will have to look out for them more carefully the next time I visit here just to be sure.
Pigeons form a background wall of cooing and tits chatter nearby. A wren sings nearby, and then a robin too. I notice the gentle murmur of stream down in the alders. It is forever damp here, even in the driest of summers, and it always has a smell of marshy, willowy, muddy, decaying vegetation. The path of churned up deep reddish clay reveals puddled holes where horse hoofs had sunk into the slippery softness. Greater plantain, with its broad oval leaves and tall flower stalks thrives where the the soil is bare on the path. There are several tall purple stalks of angelica reaching up several feet out of the cool earth. Their leaves are the palest of greens, almost cream, standing out in sharp contrast to the darker tones of the surrounding nettles and brambles. The broad ball-like seeding inflorescences composed of thousands of tiny flowers are conspicuous in the space above the undergrowth between the trees.
Leaves are just beginning their autumn descent in this dark secluded corner of the landscape and honeysuckle is still in flower entwined in vegetation by the edge of a small duckweed covered pool. A squirrel appears on a branch nearby and runs off.


There is more deep croaking above me, an eerie call, in what feels an enclosed place of shadows and timelessness.

Posted by Matthew Slater at Monday, September 23, 2019 No comments: 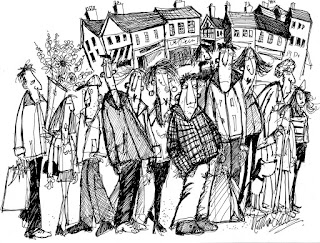 I have been working on various creative projects in the past few weeks:

Posted by Matthew Slater at Sunday, September 22, 2019 No comments: 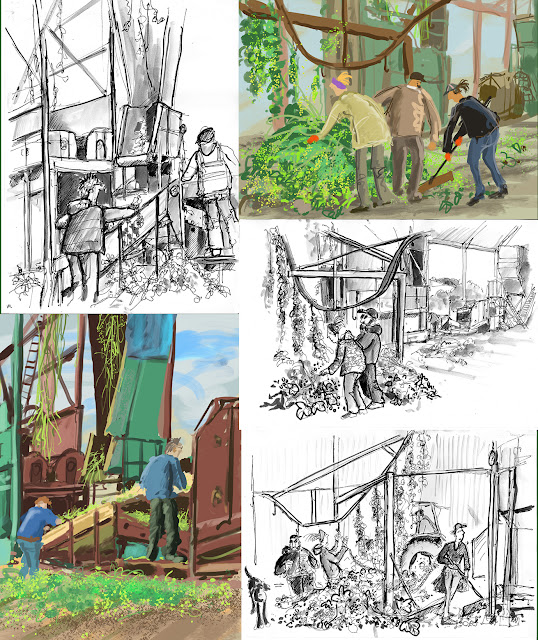 The hop harvest has always fascinated me and a few days ago I had the opportunity to visit a farm in the Teme Valley in Worcestershire to watch the huge hop picking machine at work. I was there last year but didn't really get what I wanted so spending a whole day drawing on the farm was like being in heaven! The sketches were rather quick as I wanted to work freely and unplanned machine stoppages could easily happen at any time. The black and white sketches were A3 pen and wash sketches whilst the coloured ones were done on the iPad. I took lots of photos and have a few ideas for some proper illustrations to work on during the autumn.

Posted by Matthew Slater at Monday, September 09, 2019 No comments: 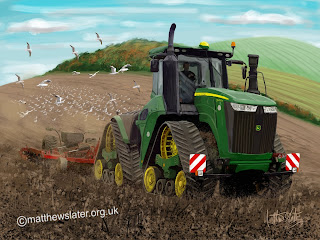 Took a few photos of this tractor working near Offley, Hertfordshire, yesterday and then created this illustration. Only gave myself a day to do it as I should have been thinking about some pictures I want to put in an exhibition this autumn. iPad illustration using Procreate.

Posted by Matthew Slater at Sunday, September 01, 2019 No comments: