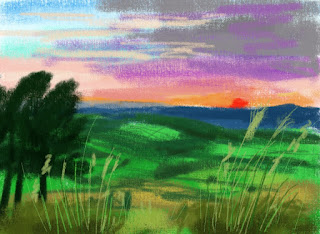 Writing based on notes made Thursday 5 July 2012
I’ve just driven up from Bedfordshire and now, at  around 8.30pm I have parked at Croft Castle. It is a superb evening - warm, some sunshine between the clouds and everywhere is so green after all the rain we have had. Little did I know that the next day would bring a day of almost continuous rain and many flooded roads.

I walk up onto Croft Ambrey and sit at the western promontory. The sun is a glorious bright red and within a couple of minutes it has dropped below the western welsh hills. I manage to do a quick sketch on my iPad of the view before the light begins to fade too much.

The top of the hill fort is awash with soft grasses and pink foxgloves. The ground is so wet and as there are no sheep grazing here at the moment the place is beginning to look a little overgrown. As I walk back down the hill three strong scents surround me. Bracken, barley flowers and freshly mown grass. In the dampness it seems as though the fragrances are almost overpowering. They fill the air which is saturated with the smell of nature. It is very quiet here - almost unbelievably so. How different to the inherently scentless towns we live in that only create their own smells though the activity of humans. In a place surrounded by bricks and concrete we create the smells of car exhausts, cafe’s, rubbish, cigarettes etc.  There is no innate natural fragrance. Only nature has the power to generate such things - and primarily it is the plant kingdom that has the upper hand here.

Often people seem to talk about the search for God. Where is he? How can I know Him? To me, when I am in a place like this there is no need to search for God. God is all around me. It is the natural world - its essence of being. The meaning of life becomes the gift of being able to enjoy its beauty and to share in it. Yet through selfishness we often seem to want something more aligned to a consumable faith.

Modern towns and cities are far removed from a sense of ecological living where small scale, low impact sustainable communities can live in harmony with the natural world without being dependent upon the superstructure of imported consumables and the problems of mass waste production. Unfortunately the demands of a massive population and economies of scale favour modernism rather than the ecological.