The following snippets of conversation were overheard from a table next to me in a cafe recently. It is always fun to go somewhere where there are interesting people to draw and listen to. I could create a picture from each of these quotes!

'I cut the hedge using scissors yesterday.'
'I'm off the Met (opera).'
'I'd prefer a nice soothing requiem.'
'They've got a penguin pie.'
'You always have such lovely dresses.'
'Oooh, I love scallops.'
'The Venerable Bede is my favourite author.'
'I must take these glasses (spectacles) back to the church.'
'Our grandson has named his cat Orion.'
'She said "our child's a boy, he does NOT read beatrix potter!"'
'I've got sixteen starlings.'

Had some time to spare around Letchworth yesterday so did a bit of scribbling in various places. 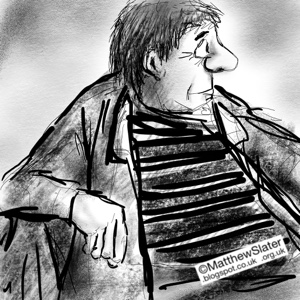 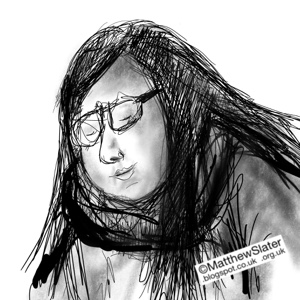 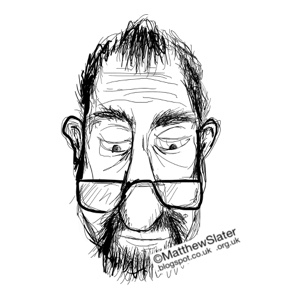 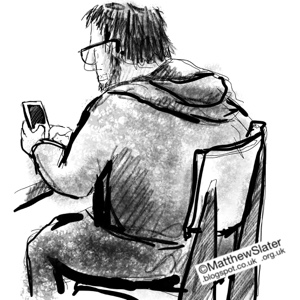 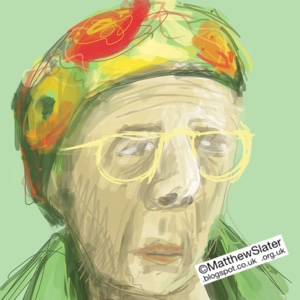 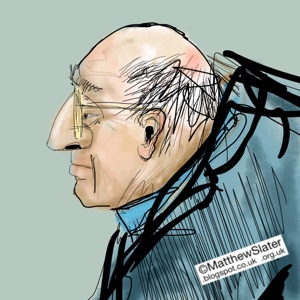 A robin seemed to ne following me around the garden today. It was often perched on a fence or nearby tree and would dart down to the ground every so often to presumably catch a little snack. This isn't supposed to be me bytheway. It was the hottest day of the year so far today and a coat would certainly not have been appropriate in the heat. Took three car loads of rubble to the dump, built a small stick wigwam for sweetpeas, moved the swing, fine tuned the placement of a few plants and watered all the new plants. 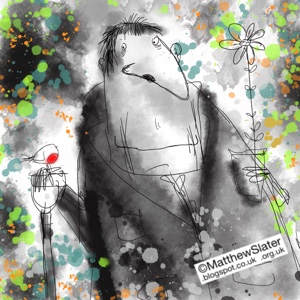 Ecopsychology and the Garden

I have been reminding myself of my interest in ecopsychology that seems have been placed on the back burner for too long. This is idea that humans, over the course of a good few thousand years, have gradually distanced themselves from the natural world. Where once the tribal hunter gatherer societies had an intimate connection with the plants, animals and landscape around them, we have now progressed (in a broad generalisation) to a digital society whereby all our food, clothing, consumer items and culture can be obtained via a single internet connection. Why sould we pay any attention to the earth around us? As long as someone else can get their hands dirty, grow crops, work in unsavoury conditions and keep the supply chain going then we are quite happy.

This spring, for me, has been a time of focussing on the garden. This is the only thing I can do at the moment that works with the natural world. Here I can aid the earth in doing what it does best: growing plants. I am working with the soil, using natural materials were possible and providing a new place in which I can allow beauty to develop. It takes time and effort but eventually it evolves. It is a reflection of me in that I am being the creator of the garden. Plants will inevitable do their own thing, but I am trying to provide a framework within which the garden can develop. It is like painting a picture, it isn't always possible to see what will appear until it is finished, but in some ways this is easier and a more healthy and natural way to be creative. 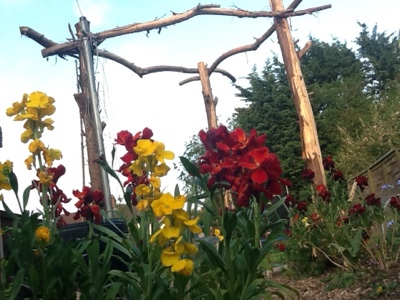 As the world of social media and the internet takes over more and more of the way I gather information, I begin to observe more and more that I find myself struggling to have an opinion on things. My father was quite an opinionated person in that he always had a view on the government, politics and things that were happening in the world. Even as a teenager I remember listening to him and having a sinking feeling in my stomach that I really couldn't engage in a meaningful conversation with him. Perhaps some of it was due to him being a farmer and being surrounded by other very strong minded people. I just never seemed to develop an ability to talk about the sort of things that keep conversation lively, interesting, contemporary and challenging. My mind just wants to go blank and seems just unable to know what to say next.

I was catching up with something on Facebook the other day that had been circulating last year - as often happens I feel part of my being ambles on at a rather leisurely pace. I'm not going to expand on it here because it is all covered elsewhere on the web but it revolved around some Christians trying to break down some stereotypical assumptions of how they thought they were viewed by others. For example: "I'm a Christian but I am not homophobic". Great I thought. Then, as I delved deeper, I again realised how easy it is for people nowadays to come down on simple statements like a ton of bricks and either wholeheartedly support something or completely shred it to bits.

For my father, whatever opinions he had he could really think what he liked because there was freedom to do so without everyone else feeling they had a duty to chip in and say what they think too. Today it seems as though even simple comments can suddenly turn the media spotlight on someone and out comes a deluge of support or hate.

Perhaps I am getting old, but sometimes I don't even quite follow what it is that people are on about on the web or in the news. I wonder if the increasing speed of being able to present information is meaning it's clarity is being lost. I can't quite give an example but often it is related to the above - about what people say. I find myself thinking 'what was wrong with that...?'.

As I have an interest in art, perhaps that has become my coping mechanism. I am free to explore and express myself in ways that don't require a spoken explanation. My art frames the way I feel comfortable communicating. Perhaps I should recognise that more. I do though, get very frustrated at not doing deep and meaningful conversations... but then perhaps I haven't got the appropriate people around me with whom I would naturally build a rapport with or share like-minded interests with - like my father had. 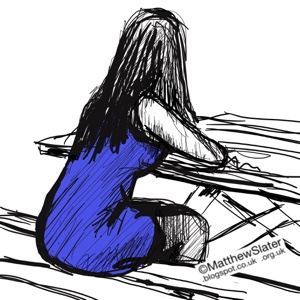 A day trip to Brighton could have been a good opportunity to do some sketching but I didn't do much. The sun was too bright to use the iPad and it wasn't until the end of the day that I found a place in which I would have felt comfortable. Enjoyed time looking in shops and walking along the beach instead. Managed a few sketches in the train but they were not really of value to show, except this one. 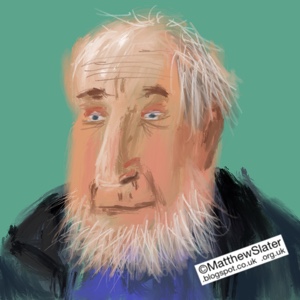 Spring in the Garden 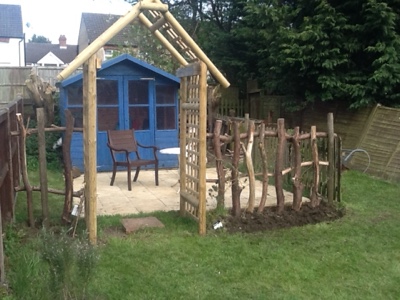 Unusually for me, I have hardly been out walking in any countryside this spring. I have only caught fleeting moments of the smell of oilseed rape flowers whilst driving along the motorway with my window open and it has been my family that has gone exploring bluebell woods and not me.
Most if my weekends over the past few months have been occupied in rearranging our garden. Flower beds and vegetable patches have been reshaped, paths realigned or created and wooden structures like an arch and pergola built. Sometimes I feel as though I have a tinge of OCD in that I always seem to find something to do. For instance: yesterday's only task was to spend the morning planting a few salad seeds and then spend a restful afternoon enjoying the garden in the spring warmth and sunshine (a rare occurrence so far this year). However, by the time I was ready for an afternoon cup of tea, I had also tidied up all the path and lawn edges, mowed the lawn and created a new wooden rustic fence up by the summerhouse. Once I get going I can't stop. I think I have now completed all the hard landscaping tasks and now just have a few plants to get.
I have tried to do as much work as possible without spending anything. I had to buy some wood from which I could make an arch and get plants. Otherwise I made use of paving blocks and woodchip being discarded by some builders and used some wood left over from when I cut down some conifers a couple of years ago. I had a supply of nails left over from my father and just planned simple things that needed just a bit of will power and muscle to complete.
The garden now 'flows' better and feels more like ours. Walking up to the top is a much easier and more enjoyable experience. There is more height and more interest. It just needs some planting to bring it to life.
For the first time this year I am sitting writing in the garden shed. So far it has been too cold to entice me out in the evenings but now things may be on the turn as warmer weather is forcast.
Posted by Matthew Slater at Monday, May 02, 2016 No comments: