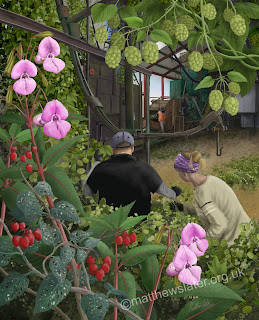 This took a bit of working on and I could have tweaked it here and there. This is a hop picking machine I visited in September in Worcestershire. The two workers are attaching the hop bines brought in from the hop yards to the trackway. The hops are then lifted into the picking machine which strips the hop cones from the bines, removes all the stalks and leaves, and carries the cones off to to be dried. Just outside the shed himalayan balsam and woody nightshade were growing. I added them in, along with a few hops at the top, to frame the image.

I started by drawing a outline A3 sketch in pencil which I then scanned. From then on I worked entirely on the iPad, using the split screen function to view reference photos and my working image side by side. The final image was A3, 300 dpi and 190MB. With such a large file size I was limited to 30 layers so had to keep flattening parts as I progressed.