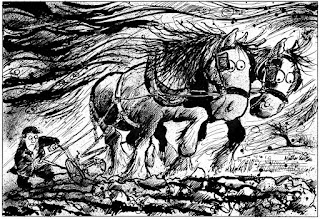 I drew this picture a few years ago and it seemed an apt illustration for this blog.

Perhaps it is because it is Spring that I am feeling restless, and sitting in a hot airless office all day long doesn't help. I feel as though I am struggling to plough the ground for something. The plough feels heavy and hard to pull. I am not sure what I am going to plant or what will happen to the land. I want to put energy into the ploughing, but it feels bl**dy hard work and I barely know where to start. I just want to plough, to see the land turn, to smell the fresh earth, to see what I will uncover, to see what seeds I can find and what will grow. I can't even see or imagine what the field will look like at harvest time.

Sometimes I feel I am stuck in the prison of low self-confidence, other times I feel as if I could fly. I can't retrace my life path, I can only go forwards and I just seem to be unsettled in wondering how to proceed. I am happy with the greetings card company, on the whole, but need to try and maintain a bigger life picture of where I want to go and not loose touch of where we, as a family, should be.

Here are a few areas that I am exploring:

This is why I feel as though I am ploughing the ground. 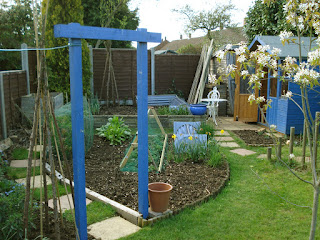 The garden is proving a great joy this year. I'm working harder on it than other years in trying to grow a diverse and successful range of crops. I would like it have a more of a 'wild' feel, but with limited space, all parts of the garden seem to need to serve a purpose and I don't have any 'dead' areas that I can just leave - apart from a few small patches used as stick piles, an old compost heap and a few odd corners. I want the land to be productive and used efficiently but yet still have a good balance between grass lawn, flower borders and vegetable growing.

I've expanded the veg patch this year and using a fairly tight planting scheme to try and ensure high productivity. Last year I bought a small plastic greenhouse, a bit like a tent, and so far it has been successful and I can now hardly fit into it waht with various seed trays and pots!

The main problems I face in the garden are slugs and snails and wanting to use as little water as possible. Most snails end up over the garden fence, but apparently they have strong returning instincts (I heard recently of marking their shells with tippex to see which ones kept returning!). I'll admit to using pellets, but this year I may try something different, though not sure what. I could tyr the scissor system as adopted by my Mother-in_Law. In previous years I have used a combination of household waste water from washing up and general sink wastage and plain tap water. I've usually mulched around tomatoes, courgetts and runner beans (etc) with flinty gravel - either from stone picking around the garden or from other sources (a river!). This year I may try wood chippings. I did have my eye on some by a roadside a few miles away where some trees had been cut down, but apparently fresh chippings reduce soil nitrogen if they aren't well rotted, so I may buy some. I had wondered if it were possible to create mulches form waste plastic containers, perhaps by cutting them up, but I've decided to abandon that idea as I don't want bits of plastic all blowing around the garden. I should really have a water-but by the side of the house. What I may do is to get one by the veg patch and try and rig up a drip feed watering system to reduce watering time, particularly if I go way. As we are now on a water meter I am very concious of the water we use. I know that water is almost an unlimited resource in the country, but I do feel that I should respect what is available to me. We can take it for granted, but from a natural perspective I know we are very fortunate to have it and I feel obliged to use it with care. In the past I have tried to steer away from planting in pots and tubs, but in order to make use of the greenhouse and the patio space, I am using them but need to make sure I have a careful water management sytem.

So far this year, the garden is home to:

I am always amazed at how much time is spent doing odd jobs and getting the garden in order, there is always something to do. The new arch, as shown above, is really one end of the washing line. I wanted something to add interest and height to this part of the garden, but it had to have a low shade footprint. Runner bean poles will extend from it and round to the right in a month or so.

Last year I knew that we had at least four or more frogs in the garden. I was therefore upset to discover I had disturbed their winter hibernating space back in the late winter when I moved the greenhouse. Two were later found dead on the lawn. I then managed to inadvertantly squash another under a plant pot in the greenhouse (I found it a few days later and realised what the cause of the rather strange smell was), but there was still one hopping around behind the summerhouse last week when I tidied up all my pot plants.

A couple of years ago I made some decent sized rectangular planters out of old pallets. I may now ditch these for some new plastic ones. They have rotted and fallen to bits and there were very heavy to move once full of tomatoes. They looked nice though, and if I had made them out of treated timber they may have lasted, but I'm not sure if I want to go to the effort to make new ones again. Things move around the garden alot, even the obelisk has moved twice in the past year! I am always looking for the best place for things and as the garden develops so things need adjusting a little.

We have seen a Red Kite three time in the past month or so flying above the garden. Two of those occasions were while we were having Sunday lunch!
Posted by Matthew Slater at Sunday, April 27, 2008 2 comments:

The Permaculture course I was planning to go on in May and June has had to be cancelled. Now what's all that about then? I had been wanting to go on one for several years and it would have been wonderful, and so close to home. Oh well, perhaps there is something else lined up for me this summer...
Posted by Matthew Slater at Friday, April 25, 2008 1 comment: 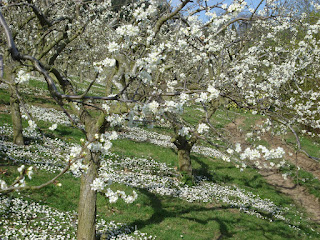 A few weeks ago I found myself spending a week around the apple orchards of Putley in Herefordshire. Although it was too early for much of the blossom to be out, one small orchard was in full flower, with neat rows of white daisies around the bottoms of the trees. It was a magnificant sight. As a child I would have seen this every year on our farm at Hanley Child, near Tenbury Wells, where we grew many acres of eating apples.

Just standing amongst the trees seemed a deep emotional time for me. A deep sense of presence that extended back to my formative years. Perhaps a sense of nostalgia and a feeling for something that I had lost and not now part of - a farming community. When Dan was, I suppose, forced to give it all up and bulldoze down the trees; and then seek a life as an artist in the wilds of Shropshire away from the family, perhaps a connection was broken. A connection with him, with my childhood, with the landscape, with creativity and with a strong male role-model to lead me. There was no doubt he was an idealist. He could talk about politics, ideas, farming, the countryside, wildlife...

Over the years, perhaps I have been striving to make a connection with him that I felt I couldn't quite do while he was alive. Since a year before he died in 2004 I know that I have been on a journey. A journey that I believe prepared me for his parting, that prepared me for facing redundancy, for finding my new job and that now carries me forwards in how I think and view my world.

After a weekend of hard gardening a couple of weeks ago I felt that I had achieved something. I had worked hard to build a success out of my vegetable patch, albeit only a small one. This year would be a good year - the best ever for the garden, and I will work hard to achieve it. Dan would have done that. I now feel that my personal artwork has at last reached a point where I am happy with it - I am painting and drawing every day in one way or another - just as Dan did. Also, I am developing ideas on how I view the world by way of philosophies and ideas - just as Dan did. He was a hero to me, I have to acknowledge that, though I fully accept that I am still perhaps naive in not really appreciating or knowing all about the more troubling parts of his life or how he treated my Mother. But I was too young when he left home to really be impacted by it in a way that I can really acknowledge. Have I tried to be like him in my life? Well yes, but perhaps subconciously, and I just seem to have mirrored his interests and what inspired him. I am, though, determined never to leave my family.

I now know that I am an idealist. I'm not a label person, but I have had this word described about me several times this year and I know that this word seems the word for this year.

In some way I can meet Dan in the apple orchards, in the garden and in my 'green' thinking. I wish I were able to share my ideas with him now, I think we would have so much to talk about and I am sure I would be closer to him and could learn so much more. But no, I am alone now. I am on my own path. I respect the past and I'll always carry the dream and hope of the springtime apple blossom with me.
Posted by Matthew Slater at Friday, April 25, 2008 No comments:

What's on my mind today?

So, what am I thinking about at the moment?


I think that will do for the moment.
Posted by Matthew Slater at Tuesday, April 22, 2008 1 comment: