Lambs and sheep on distant hills 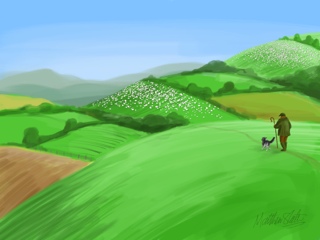 Posted by Matthew Slater at Thursday, January 31, 2013 No comments:

To me, February has often felt to be a rather 'flat and black' month. If there has been snow then the ground level vegetation lies flattened against the wet earth and fallen leaves form carpets of black rotting matter. This year, a mild spell at the beginning of January gave way to a period of cold snowy weather which has now dramatically gone and given way, almost overnight, to much warmer conditions so the ice and snow has virtually disappeared.

I am sitting amongst a patch of creaking hawthorns on Pegsdon Hill sheltering from the blustery wind. There is almost a gale blowing up here on the hill with only a breeze further down. Looking out over the flatlands of southern Bedfordshire patches of sunlight are appearing in the haze and a blueness is clearing the clouds away above me.

New spring life is visible. I've passed clumps of snowdrops just begging to open along the roadsides. Wild arum leaves and dog's mercury are pushing their way up into the sunlight and elder leaves are appearing too. I passed a garden full of the yellow flowers of winter aconite and I wonder if this February will be more alive this year.

Later in the afternoon I sat in the summerhouse where it felt quite warm in the sunshine. The garden is quite sheltered from the wind and it felt very Spring-like as I sat there after pruning a few of the shrubs and clearing up a little. Daffodil bulbs are just beginning to break thought the surface of some tubs I have planted up.
Posted by Matthew Slater at Sunday, January 27, 2013 No comments: 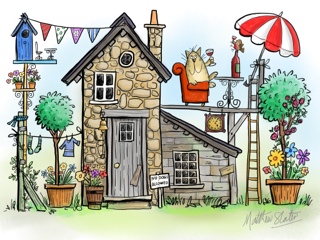 Posted by Matthew Slater at Thursday, January 24, 2013 No comments: 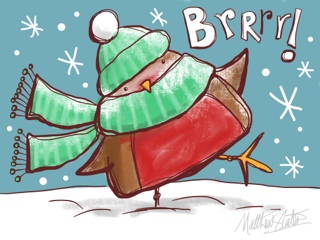 Posted by Matthew Slater at Tuesday, January 15, 2013 No comments:

A cold and slightly frosty morning with a touch of salmon pink on the horizon near Hitchin. 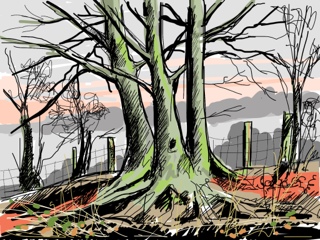 Posted by Matthew Slater at Sunday, January 13, 2013 No comments:

Exile means: the state of being barred from one's native country, typically for political or punitive reasons; a person who lives away from their native country, either from choice or compulsion.


“Have you ever had the experience of being a stranger in a foreign land?”

Could be a foreign country, part of local town - even church itself could be such a place - place where there is a different, culture, food, people, beliefs etc. What are my experiences and how does that influence the things I do?

If the country I live in (the UK) is becoming less of a “Christian” country is that a bad thing? There is a perspective that says that the more Christians are marginalised then the stronger they will become. If they become exiles in their own land then perhaps God will protect and rescue them as he did for his people in the past. The more multi-cultural the country comes, the stronger christians could become. An interesting thought.

I feel I am an exile from two things. Church life and the place where I was born and grew up. The former has happened due to my journeying and displacement as I have reconsidered what my spirituality means. The latter has happened due to me leaving home and building a life in a different part of the country. I long to return to the Herefordshire that was my childhood home. It has a huge draw upon me and I hadn’t really considered the word exile as applied to me in this way before.

Can I return from exile? Whether I will or not depends on what happens in the future and the choices that are made. How does using the term exile to these two situations affect my actions and thoughts? By giving a name to this it helps to identify the things that mean something to me. By being taking on the feeling of being marginalised can I somehow grow stronger?

My journey has almost ground to a halt and, in some ways, this is a very peaceful place to be because I am no longer bound by the emotional and psychological pressure that comes with having to think about all this stuff! I can almost exist in the ‘just Being’ without having to force myself into that frame of thinking. There is nothing I need to work out, I am not being aggravated by external ideologies etc. I feel in a place of healing. Perhaps I am resting in a Spiritual Exile. A place where I can put aside things and not strive to find answers... I feel different. I wonder where to go... I want to go somewhere...
Posted by Matthew Slater at Thursday, January 10, 2013 1 comment:

Sitting in Offley churchyard. Warm for the time of year and rather windy. The trees are very noises. Shhh!

The 21st of December passed by uneven truly. The supposed prediction of the end of the world by the Mayans has not materialised. Has the dawn of a new age of consciousness arrived? Not sure. Judging by the normality of depressing items I doubt it. It seems as though people and the world never learn from the past.

Perhaps another age old prophecy of the end of time and the dawning of a new age will be heralded and we will all meekly want to follow it. Oh look, it's Christmas Day shortly. That reminds me of something...

Human construction or human destruction. The rhythm of the natural world goes on. Oblivious perhaps to the desperate need of mankind to find some kind of escape from the the deep consciousness of pain, suffering and mortality that it has become aware of. I saw no signs in nature that it was preparing itself for the end - just loads of varied belief systems that honestly seem to have gripped people's thoughts - aided and strengthened no doubt by the mass of pick-and-mix ideas off the Internet. The alienation of man from his environment is becoming extreme.

Here in the churchyard the burden I feel is lifted and I am surrounded by the elements that my ancestors lived with day and night. It may have been idyllic in some respects, but would I have really have want to live back then without the technology of today? What were prophecies for in those days? Hope, cultural survival, belief, control, wisdom? People saw things around them, were deeply aware of the landscape and their environment. Now we have amazing flat screens that bring the world to us. I am not sure what we are becoming, but in some ways we are becoming moulded into the technology that now surrounds us. Soon perhaps our neurons too will become directly wired to circuits and devices to heal us of illness, to entertain us and to find out the times of the train.

Yet the natural world goes on just as it has always done so. Adapting, changing, living. Is it going to change us I wonder, or are we changing it?

Is religious belief ultimately futile? Or do we need prophecy?