I’ve spent much time over the Christmas holidays working on a character style and trying to focus in on something. It is so easy to do cartoony stuffy yet I feel I want do more mature illustration work. Folk/naive art has intrigued me. I like Dee Nickerson's work and many of the illustrations that Green Pebble publish on their cards. The illustrations I did for my booklet, The Apple Weaver, were a step in that direction. The iPad is a great help in that I can easily work on something whenever I want to. Painting digitally is easy, yet the images can look just a little artificial, smooth and lacking in the subtle randomness of texture that natural painting can bring. I have decided to get my acrylic paints out and have another attempt at getting started with that medium. Previous attempts at mastering acrylics have failed mainly through lack of persistence. I used to do a a lot of watercolour/ink work which is quite different to using actual paints. This time I've watched a few youtube videos and they have been a great help.

The picture below was a playful experiment using the paints I have.

The slight problem I faced in doing this was that I really needed a small desk easel. So, over the weekend I made one from some scrap wood. Unfortunately, the small room in which I work has a table facing the window. Ideally I needed the table positioned so that light would come from the left of me. Thus, I had to turn most of my furniture round through 90 degrees. This worked well and forced me to solve a few other niggling things to do with storage and wiring. I also fixed up my 6ft daylight strip lights to the ceiling which had been hidden in the shed since we moved around 6 years ago. I had to work out where the joists in the ceiling were so that I could screw the light fitting in securely and the lights just have a lead going to a wall socket so I can use them independently of the normal ceiling light.

With that job done I decided, again after 6 years, that I did want some of my old artwork to hang in the house so up went a few pictures - just in time to take them all down again when we begin decorating in the spring!

Now, I will begin to create the sort of painting I would actually like to paint. Just need to decide what to do.... 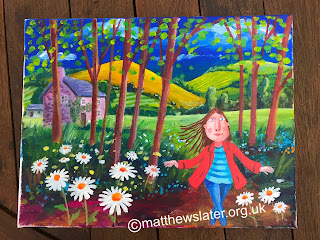 I worked on this during my lunch breaks over the past week. I combined elements from a few photos taken at New Year. I wasn't sure of it was going to work but I was glad I persevered. 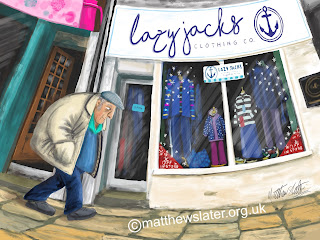 This quick iPad sketch was made at Cotehele (National Trust) at the beginning of the new year. 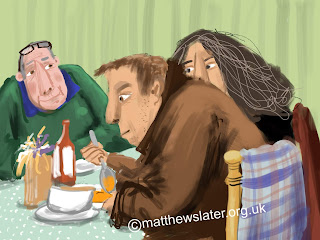 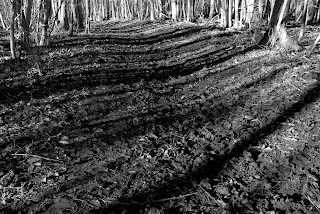 A week or so ago I walked round the farmland surrounding Wrest Park in Bedfordshire. The weather was cold and overcast and a moderate effort was required to find the motivation to just get out and do something. Taking my camera with me I decided to play around with taking a few random pictures of anything I could find. The sun came out for a short while as I was passing through some woods and, as it was low in the sky even at midday, the shadows cast by the slender ash (?) trees were quite stunning. I then began a quest to find an interesting photo to take. The photo here has been adjusted a little to enhance the contrast and remove the colour. The sunlight was just in the right place coming from my left so my own shadow was not visible as I walked along the footpath between the tress. It took a few minutes to find a location where the lines of shadows and trees were not obviously disrupted by obviously diagonal wayward branches or fallen trees. There was also a field to my left which meant the there was only a narrow band of trunks casting strong shadows with little interference from a higher canopy to blur the lines.
Posted by Matthew Slater at Monday, January 07, 2019 No comments: