A World of Otherness 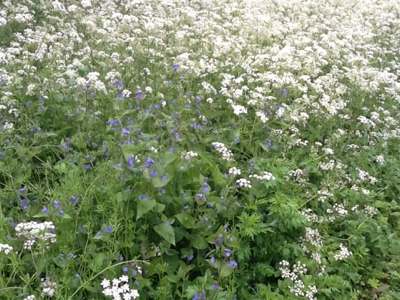 It is raining and all around me the deep green luxurious growth of nature surrounds me. Waves of cow parsley tumble over the grass verges, blossom cascades over the hawthorns and from within the damp earth there is an explosion of vegetation. Apple blossom still lingers and speedwell forms blankets of blue within the carpet of dandelion seed heads. Dustings of yellow and blue flowers intermingle with the greenery. Birdsong fills the air above the background hum of traffic. I often find that seemingly wet and dull weather can often bring a different awareness of a place to the senses and as I pass through this particular place I am glad I made the effort to go out in the rain.
I almost cannot cope with being thrown into this world of otherness. It is so distant from the hours I spend in front of a computer screen at work. In a place like this I feel very much at home. It also has a completely different feel to the organised design of vegetables and flowers in my garden. Here is nature running wild. This is nature's church. An ecological community of creative beauty full of diversity, life and productivity.
My spiritual writing has taken a backseat for a while because, to be honest, it is b****y hard work. I often feel I am getting nowhere and struggle to find relational inspiration in my immediate world. The is so much that seems to beckon me to take a look at and I do tend to find that my senses work better with the real and tangible rather than the mystical. I am happier with what I can make out of what I can observe. Perhaps that is why I am good at illustration work. It frustrates me though that emotions, ideas and thoughts change over time and I feel a rather lonely pilgrim who finds so much to look at along the way.
The web is, of course, full of the weird and wonderful and I could connect with like minded people there, but in many ways I don't like dealing with people in such a detached way. I am inspired by people - I love observing and drawing them. Part of me yearns to be in a place of community - of helping, doing, supporting. A computer screen has just becomes a tool for meeting deadlines. It does not help people physically. Pushing my mother in a wheelchair around St Albans recently highlighted to me many things about how difficult it is for some people to do basic tasks. It was not just the task of visiting shops and finding out where she could do this or that, but just the practical difficulties of dealing with uneven and sloping pavements, undropped kerbs, busy road crossings, people rushing about all around us and just the sheer physical effort required to get up steep hills. It was a good job the wheelchair came with a seat belt! As a result of a change of circumstances I am now developing a small questioning part that is being agitated to ask "what should I perhaps be doing?"
Otherness is all around us but sometimes it takes someone or something to open our eyes to a different world.
Posted by Matthew Slater at Sunday, May 31, 2015 No comments: 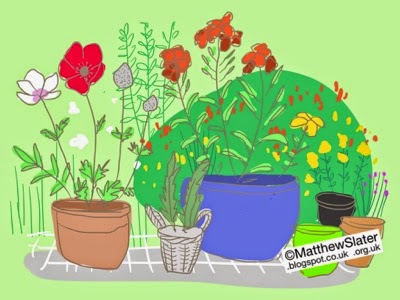 Wall flowers and anemones on our patio. These have given us a wonderful display over the past few weeks.
Posted by Matthew Slater at Sunday, May 17, 2015 No comments: 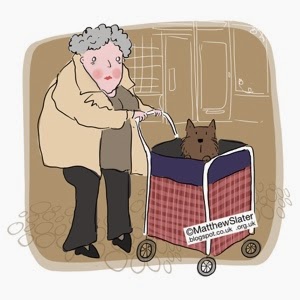 Sketch based on something I saw in Hitchin this morning. A Scottie dog (or something similar) being pushed around in a shopping trolley. I'm not too happy with the figure but it will do for this quick pic.
Posted by Matthew Slater at Saturday, May 16, 2015 No comments: 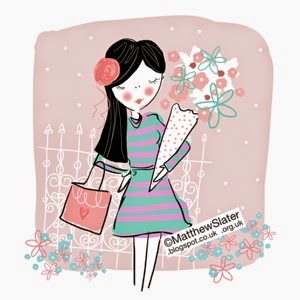 A beautiful bouquet of flowers. I have been inspired for a while by some particular illustration work on the web and I am at last trying to see how I can develop something similar from my perspective. This is only a doodle and not properly structured as such, but there are elements in it I like.
Posted by Matthew Slater at Friday, May 15, 2015 No comments: 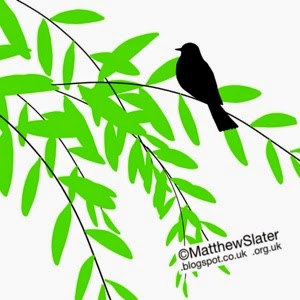 A blackbird sitting in a willow tree in a neighbour's garden this evening.
Posted by Matthew Slater at Monday, May 11, 2015 No comments:

This spring seems to have found me working hard landscaping the Garden and not doing much artwork. Since we move into the house a couple of years ago the garden has needed some attention. A long stretch (nearly 30metres) of concrete path has been dug up, new vegetable patches created in the lawn and a new patio built in front of the summerhouse. The photos show the top two-thirds of the garden where all of the landscaping has taken place. Yes, I was standing on a ladder to take the first view! Today I finally felt that I had tidied up many loose ends, finished arranging all my seeds and plants and restoring a bit of balance to the place. I am not keen on bedding paths and structures in too much concrete as I like gardens to change and evolve. Even today I was realigning a path to fit in with how we now move around the garden. Ideally I want a paved path all the way up the garden. That will now probably be an autumn job when I won't have so many plants in the way. There are some long term projects on my list of things to do. We would like a bit more height and so will add an arch or two here and there (the area in front of the summerhouse will all be reshaped) and I need to built a proper compost heap. A large pile of hardcore is available to anyone who wants it and if anyone likes playing with chainsaws then I can keep them occupied for an hour or so!
The biggest stress was working out what to do with my tomato plants that were growing too vigourously indoors and yet I was reluctant to place them outside. I decided to build a tall triangular polythene covered cold frame in which I could place six plants in buckets and it hope that will keep any chill off them over the next few weeks.
Vegetables that I hope to harvest this year are: tomatoes, courgettes, lettuces, radishes, celeriac, leeks, beetroot, cucumbers, sweetcorn, potatoes, chard, garlic, strawberries, parsnips, runner beans and probably a few other bits and pieces. 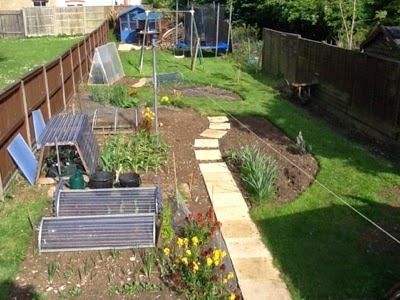 A week ago found me at 5 am walking through Fishpool Valley on the Croft Castle estate listening to the dawn chorus. This beautiful small wooded valley is always a pleasure to walk though and when one is surrounded by a cacophony of high definition birdsong it made the several hundred mile round trip so worth it. Well, I did have other motives for making the trip at that time, but when I had an opportunity to be in that place and at that time I was certainly not going to let it pass by.
The previous evening I had been up on Croft Ambrey watching the sunset. I am fairly certain I saw a redstart up there. It isn't a bird I generally knowingly come across and the fleeting glimpse of its red tail in the evening sunlight has stuck in my mind ever since. One day I ought to invest in a pair of binoculars. I had a great pair in my teens and haven't done any serious birdwatching since then. I'll add it onto my list of things to do.
Posted by Matthew Slater at Sunday, May 10, 2015 No comments:

I have been meaning to post this picture for several weeks but have been sidetracked by other things. This photo was taken at Dukes Coffee House in Tavistock, Devon, on Easter Saturday. It was just warm enough to sit on a bench for a while, have a cup of coffee and a piece of cake and do a little bit of sketching. This is quite a good location as there is good throughput of interesting people either sitting or just walking by. I could quite happily spend day after day there but, as my visits to Devon are only a couple or so each year, I have to make do with only a limited time there. 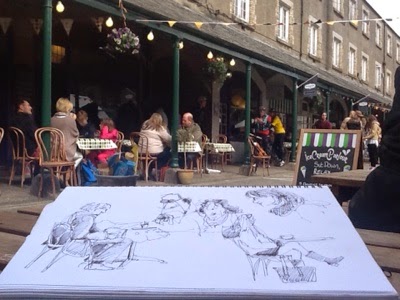