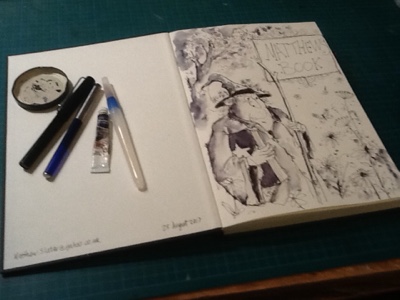 Summer holidays and experiences are great time for thinking about change. Have decided to change my rough and rather scrappy sketchbooks into more of a journal. Bought a new hardback A4 sketchbook today with a stitched spine rather than wire. This should make doing larger illustrations easier as well as an encouragement to draw more acurately and make notes, write things etc in a more constructive way. Also bought some wonderful 'Aqua Flo' watercolour brushes that can actually be filled with water or coloured inks. This will make doing more tonal sketches far easier as I can work loosely in watercolour with just a dab of paint on a jam jar lid and have a flexible watercolour brush that can add water by squeezing just when I need it and without all the fuss of water pots etc. That has also saved buying a new IPad and Apple pencil! Looking forward to seeing how it will work out. Filled in the title page this evening.
Posted by Matthew Slater at Monday, August 28, 2017 No comments: 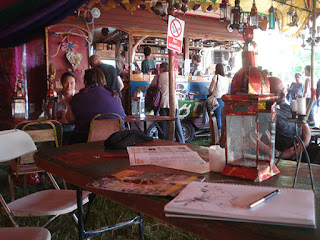 The best place to draw and meet people at Greenbelt: the Tiny Tea Tent. Visited Greenbelt for one day this year and really enjoyed my day there. The Tiny Tea Tent provided endless varieties of tea but only one type of coffee. Not sure how my first cup of the day was brewed but the second, in the evening, came in a one cup cafetierre and was delicious. Apart from doing lots of sketching here and chatting to a few unknown people, managed to help light some of the many candle lanterns in the evening. Must return again sometime!

Posted by Matthew Slater at Monday, August 28, 2017 No comments: 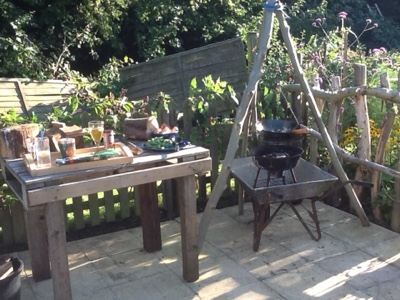 Cooking chicken curry in the garden. The wheelbarrow holds a barbeque fire pit. Suspended from the ash branch tripod is the top grill section from the bbq set raised above the fire by chains from a hanging basket and some thick galvanised wire. This holds a wok and can be raised or lowered up of down depending on the fire beneath. Once cooking complete the wheel barrow and fire pit can be moved from under the tripod to enable a larger fire to be created for evening warmth (and not burning the tripod).
Posted by Matthew Slater at Monday, August 28, 2017 No comments:

Someone eating a baked potato. 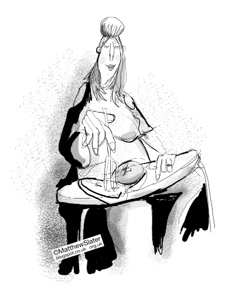 Posted by Matthew Slater at Monday, August 21, 2017 No comments:

Some pages from my sketchbook from a recent trip to Northumberland. Alnwick town centre with some rather disproportionately sized people, a man on his phone in Alnwick Gardens and a gardener mowing the lawn at Howick Hall. This was supposed to be a sketch of people wandering around the garden and sitting on the benches, but no one obliged at the right time... 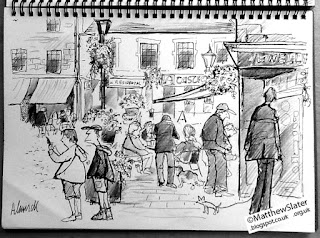 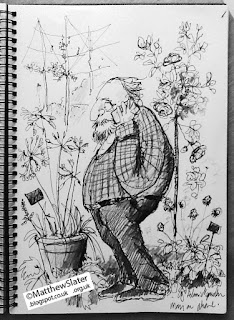 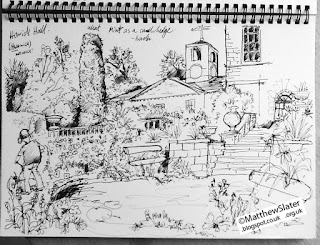 Posted by Matthew Slater at Sunday, August 20, 2017 No comments: 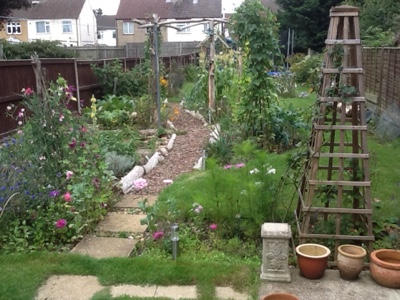 With thanks to the rain and the sunshine the garden is actually looking rather pleasant this year. The spring always seems a stressful time as seeds are sown and expectations are placed high on the ground to bear fruit, vegetables and flowers. Next year I must remember to start off all seeds undercover, that does seem to produce the most successful plants.
The runner beans, courgettes, lettuces, cucumbers and herbs have been successful though not always plentiful. Sweetcorn looks to be progressing well and I will be picking tumbling tomatoes any day now. I have quite a few healthy purple sprouting plants in various places which look very healthy thanks to my de-caterpillaring when they were young. My hop plant is now over six feet tall and looks healthy too. Sweet peas and cornflowers have done well along with all sort of other flowers here and there. One apple tree has failed with small scabby fruits only a few centimeters in diameter but Lord Lambourne seems to be happy!
Digging up part of the lawn and the ground beneath it seems to have eradicated the fungal problem only for it to appear in another part of the garden. Might have to do the same thing there too.
Blackberries have been in abundance with many bags of frozen berries filling the freezer. This has been one advantage of our neighbours leaving their garden to run wild.
Posted by Matthew Slater at Sunday, August 20, 2017 No comments: 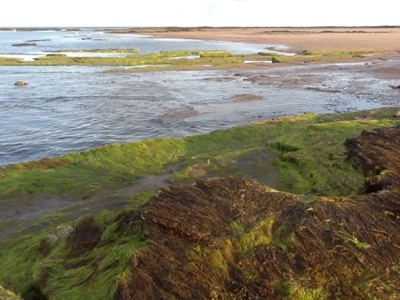 The tide looks fully out. Under the clear blue evening sky the north sea on the Northumberland coast is probably as smooth as it could ever be. Gentle waves only about three to four inches high gently lap the shore. We are here on a mid-August evening. Soft sand stretches in either direction as far as we can see with Coquet Island in front of us, yet we are almost alone. Just a few other remote figures. Where is everyone on this gloriously warm evening after a beautiful summers day?
Birds: oystercatchers, curlew, terns, gulls, cormorants, a couple of dark things flying that aren't cormorants, a small flock of 15 or so small white things flying close over the water to the rocks as the tide comes in and probably a few other unidentified waders or similar. I am reminded of the many times my father and I used to watch similar birds on the estuaries of north Wales when I was a teenager.
The tide turns and the rocks, covered in slippery brown and bright green seaweeds, are quickly submerged again. The sun makes one last peek out from beneath cloud over the Northumberland hills to the west and the dunes cast their shadows over the beach. The expanse of seaward horizon before us seems immense, reaching from Dunstanburgh Castle in the north to the power station chimney at Lynemouth in the south - a distance of approximately 25 miles.
This is one of the few places where I have ever seen my daughter be almost spellbound by the beauty of the natural world.
Posted by Matthew Slater at Saturday, August 19, 2017 No comments: 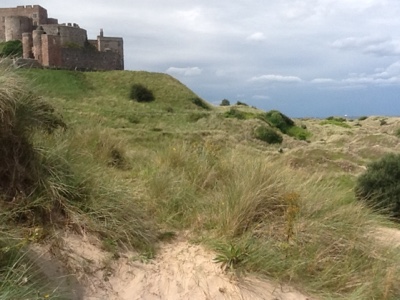 It is hard work climbing steeply up through soft, dough-like warm sand away from the seashore. Behind me there is the gentle swooshing of waves running up the shore and the chatter and shouts of high-spirited children enjoying beach-side freedom. Around me the breeze ripples though the dune grasses. The well-worn path dips away between the mounds of sand and within a few metres the sounds behind me disappear and I enter a place of complete calm - shielded from the noises from the beach and the grasses -  I am in a different world. I follow the path inland and down though the dunes. There are people here, but not many. It is a gloriously sunny, warm August day, and the miles of sandy beach have only perhaps a hundred or so assorted people and dogs as far as I can see. My wife comments that a friend in Cornwall has commented on Facebook about a beach being rammed with people. Here, in early afternoon, the path in front of me to the beach is often empty with just a few tourists passing by every few minutes.
The wind catches in a few scattered sycamore bushes and the grasses. Ragwort, hawksbit, hairbells, rosebay willowherb, clover, common centaury, wild thyme, a solitary carline thistle, snowberry, a few varied butterflies - white and browns, grasshoppers, a pipit?, tiny sun-bleached snailshells, black ants and flies, thorny ground hugging bushes with bright red berries (sea buckthorn), hawthorn, some rather ragged orange fungi and a yellow and black striped cinnabar moth caterpillar on some ragwort. There is not a huge variety of colourful dune flowers here. I recall some dunes on the Gower coast that I am sure are carpeted in floral displays at this time of the year. White rosebay willowherb seedlings float past me in the wind. Clouds of them errupt from the plants down in a damp boggy patch. Occasional heads appear above the dunes as people walk the varied paths.
The dunes form an interesting barrier landscape between the beach on my left and its people and dogs and castle, car park and village on the right. It is this edgeland that draws me to itself today. A place to sit and rest for a while and take in something of the landsacpe.
As I approach the land side edge of the dunes the vegetation begins to change drammatically. I first notice it with the presence of blackberries, then nettles, knapweed, horsetail, more varied flora and a more dense covering of grasses and general land-ward plants. I could have spent ages looking and writing about the transition between the dunes and the landside vegetation. There was no point in doing so though, it was just good to observe the change in ecology and landscape and leave a scientific investigation for other places.
Posted by Matthew Slater at Saturday, August 19, 2017 No comments:

A couple of drawings

Apologies for the lack of posts, here are a couple of recent sketches. 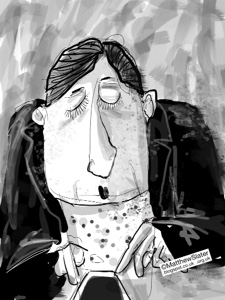 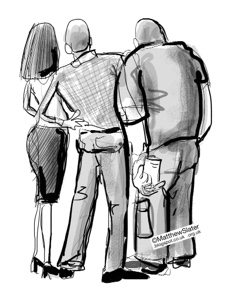 Posted by Matthew Slater at Friday, August 11, 2017 No comments: