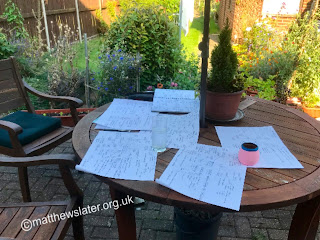 Spent the hot bank holiday afternoon planning my novel. It is a magical reality novel based around apple and hop growing around the Teme Valley in Worcestershire. I was using the technique of mind-mapping to work out and resolve some plot ideas. Unless I sit down and actively write or plan I am not able to plan in my mind all the things I need to. Sitting down with large sheets of paper and connecting lots of ideas and words together enabled me to visibly link ideas and begin to create a structure. In this case I has to work out how 'magic' or whatever I am calling it, works in my world. It has to link into the reality of the area in which I am writing and be believable. 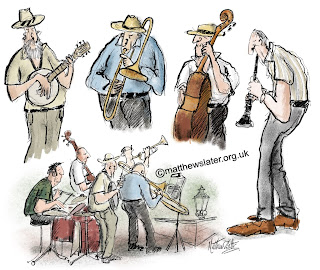 A very hot day yesterday. Sketched this jazz band in the sunshine until my iPad overheated and shutdown! I found some shade and once it had cooled down I continued with the outlines and then coloured it in once I got home and after a refreshing ice cream. My character work is so much more expressive working like this than if I used my sketchbook. Lines flow so much more freely with more expression and I can change the form of the lines and colour so quickly. 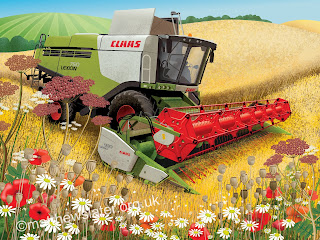 This illustration took a while to think through and create. I drew the combine first then added the landscape, not being quite sure how the elements would blend together. On the whole I think it works. Affinity Designer on iPad Pro.
Posted by Matthew Slater at Sunday, August 18, 2019 No comments:

Sketches made on my iPad in Yorkshire during the past week: rooftops in Filey, Goathland railway station tea room on the North Yorkshire Moor Railway, two sketches of the Shambles Market in York and finally the main street at Robin Hood's Bay. 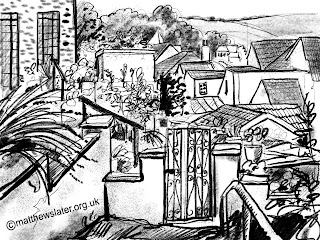 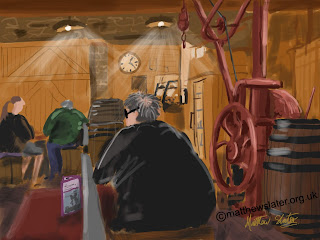 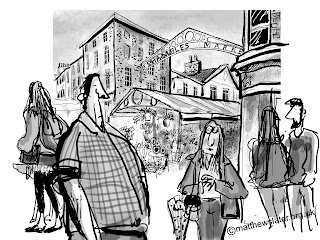 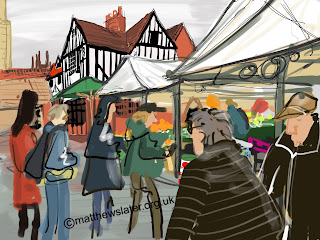 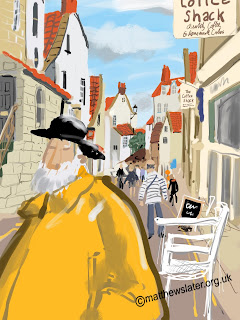 Posted by Matthew Slater at Friday, August 16, 2019 No comments: 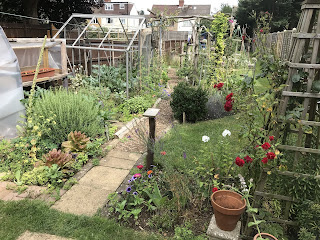 Hop: My dwarf variety is one of the fastest growing plants in the garden and had already grown over 6ft by early summer.
Leeks: I usually grow a few to flower the following year. The ones flowering now seem to attract more insects than any other flowers in the garden.
Mint: This refuses to grow where I want it to and is much happier growing through the patio.
Raspberries: These refuse to grow when I want them to and are happier in a flower bed.
Climbing beans: poor crop this year after last years bonanza
Cucumbers, courgettes, lettuces, herbs: doing ok.
Dwarf beans: Ok, but not a heavy crop.
Sweetcorn: a late addition to fill some space, doing ok.
Purple sprouting: doing well under netting. Plants nearest the fence where warmer and drier almost four times as big as those towards the centre of the garden. Which seems a little odd. Sweetcorn is growing the other way: shorter close to the fence and taller inwardly.
Tomatoes: bought plants are not brilliant, sown plants not yet ripe but look better.
Radishes and lettuces: can't grow fast enough from seed in the spring. Once summer arrives they almost refuse to grow.
Compost: I buy a variety of bags in the spring as and when I need them. I have a suspicion that some are designed to kill seedlings rather than encourage them to grow - cannot remember which ones to avoid. Or perhaps seedling growth coincided with unfavourable weather conditions....
Carrots: grow well in compost in a planter high off the ground and good crop this year.
Strawberries: did well this year. Dug then up and replanted them in buckets where they seem much happier.
Garlic: each year I say I will never grow garlic again. This year was no exception. Useless crop.
Onions: surprisingly poor crop too. Too dry in early spring?
New potatoes: small crop, only a few meals.
Spinach and chard: mainly grown for visual bulkiness.
Celery: always small and very slow growing
Weeds: Once plants are established I tend to leave weeds in. They add ground cover and so shade the soil thus, I hope, reducing water loss. They add biodiversity and extra flowers for insects etc. They contribute to a wild aesthetic and a sense that each plant has as much right to exist there as its neighbour.
Volume crop production: this is not my aim, I just enjoy the challenge of growing something to eat.

Posted by Matthew Slater at Sunday, August 04, 2019 No comments: