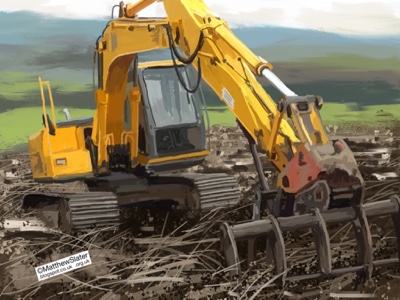 This JCB had been working all day recently up on the hill below Clunton in south Shropshire.  When the driver had gone home I took a couple of photos of the machine and then later worked them up into this sketch. All that I am basically doing is working over a photo on the iPad which is a technique I enjoy. It does produce an almost photo realistic image even though the paintwork is quite basic. It has enabled me to more quickly develop a style of working that I can apply to other images I use in my day job where I am having to create Christmas themed illustrations from scratch.

The JCB had been tidying up the left over branches and wood left after a mecahnical tree felling machine had cleared the former conifer plantation of timber. All the loose material was being piled up into large windrows across the hillside in between which new saplings could be planted on the cleared ground. The remaining tree stumps are left in the ground to rot away naturally.

Someone reading in a Hay-on-Wye bookshop. 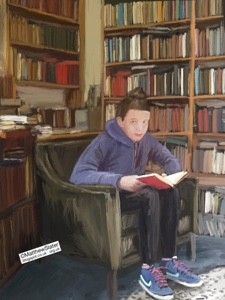 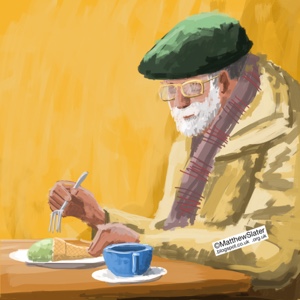 An elderly gentleman eating an ice cream cone with a fork in a cafe in Hay-on-Wye.
Posted by Matthew Slater at Monday, February 22, 2016 No comments: 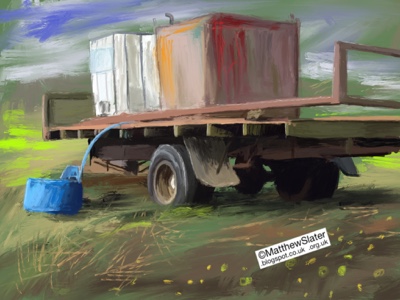 Clunton, amidst the South Shropshire hills. A sunny mid-February day with about 50% cloud cover. A cold wind blows but in sheltered spots there is some warmth.
I've walked up the side of a steep hill on the north side of the Clun valley. The footpath follows the course of an old trackway through sheep pasture. The base of the track is about three or four feet below the surrounding grassland and is lined by a hedge of mature trees on one side. Erosion on this side has exposed the tree roots penetrating the rocky soil. Today it is no more than a grassy depresssion and as I climb upwards it shallows out and eventually disappears completely in the more open higher pastures. Fresh tractor tracks in the surrounding grass up here shows that this is a route used regularly by a farmer to tend his sheep this winter, but not frequent enough to wear down any significant ruts. I come to a place used as a feeding point for sheep. There is an old trailer that has been parked here for many years. It carries a modern white plastic water tank that leads via a bright blue pipe to a blue water trough. There is also a metal hay rack nearby and in a hedge corner a very old and rather flattened wheeled sheep hay rack half buried in the soil. In the hedgerow beside the trailer is a crab apple tree and on the ground many tiny green apples can be seen trampled into the earth by cloven hooves. I also found some old metal railings tangled up in a hedge. Just beyond this is a dense hedge of holly and above that, on a fairly steepish gradient is a field that had been sown with corn last year. On another of a hedge I see a very old wooden wheeled sheep hay rack. A robin sings in a hawthorn bush beside me. I disturb a flock of perhaps a hundred redwings/fieldfares and see a few other small tits and associated little cheepy things that I can't identify.
My main thought here was whether, at some stage in the past, there had been a habitation or barn near the holly trees - though in reality this may be no more than my wishful imagination. It is a south facing site and in a small dip on the hillside so it would have been quite sheltered. I found no evidence of any structure and it would have been ploughed out anyway. But with the old track, the seemingly long established feeding point, the crab apple and hollies I just wondered if there had been something here once.
I like places like this. They seem to generate a sense of nostalgia that I like in the landscape and harks back to my farming roots not far from here. Trying to read the landscape is an interesting task and in this case I would only know if I were right by looking at some old maps or doing some local research. I have always been interested in small places that hold memories of an agricultural past. This place may be no more than just a convenient place in which to feed sheep over the years based on the field structure, access, shelter etc.
Further up the hill there is depression in a pasture, several metres square, and full of water and boggy grass.. The outlet of a spring. About a quarter of a mile away, off the footpath, is a group of three old farm buildings forming a 'C' shape and a well is marked on the map. This is probably the farmstead I was looking for. Judging by the number of mole hills around here and the fact that several more fields on the hill top have been cultivated suggests that the soil around here might be of a reasonable depth.
I wonder why the hills are cultivated more around here than the valley bottom and flood plains where I might assume the soil was of better quality? Perhaps, with the shade that the hills give over the valley pastures, the higher soils dry out and warm up bettter in the spring and are less prone to potential flood damage. The soil looks quite good up here, if a little rocky - perhaps better than the chalk flint filled shallow soils of  the more intensively farmed areas around home in Bedfordshire.
Two treecreepers, yellow hammer, heard a buzzard. Celandine, primrose, dog's mercury, snowdrops, daffodils, cyclamen, dandelion.
Posted by Matthew Slater at Monday, February 22, 2016 No comments: 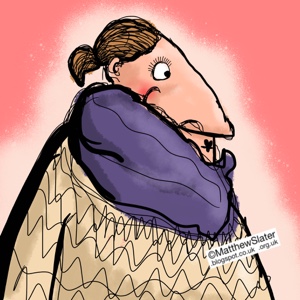 Posted by Matthew Slater at Friday, February 12, 2016 No comments:

Usually when sketching on the iPad I start off with a white background. Must try and use different colours - it does make the screen less bright for one thing. Usuing a tonal background does make adding highlights more interesting rather than just an afterthought. This was such a sketch of someone this lunchtime. 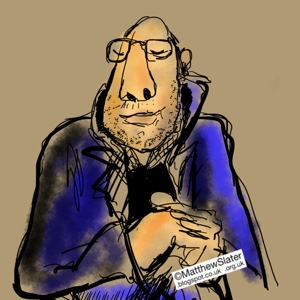 Posted by Matthew Slater at Tuesday, February 09, 2016 No comments: